Oy Vey, Again With the Candy!

One of the hardest things about people really embracing Intuitive Eating is that there's a lot of gray area when it comes to eating.  There are few things that are really black and white when it comes to Intuitive Eating so there are a lot of nuances that we can learn about ourselves as we learn to listen to our bodies. I like this gray area. It means I'm thinking about it rather than just being passive.

With that context in mind, I'm feeling very conflicted about something and I'm going to try to lay out why this issue has me going back and forth.  Being Jewish, one of the lesser known holidays (to non-Jews) is Purim.  I'm not a Jewish educator (like my wife), so I'll leave it up to you go read about the full meaning of the day but let's just say it's one of those holidays where we really celebrate!  Think costumes, carnivals, parties and of course, food.  One of the mitzvahs of Purim is to hand out food to friends and family.  The food that is handed out is called "mishloah manot."  Given today's food culture, you can imagine what kind of food gets handed out these days.  The traditional food is a cookie shaped liked a triangle called hamantashen but these days it doesn't stop there.  Since we've had kids, I've paid more attention to the food we receive and I'm noticing more and more candy and less traditional items.  Basically, it's turned into Halloween for the Jews.

Why do we give out food?  The reason comes from the Book of Esther.  There's a passage in there that says,


"the days wherein the Jews had rest from their enemies, and the month which was turned unto them from sorrow to gladness, and from mourning into a good day; that they should make them days of feasting and gladness, and of sending portions one to another, and gifts to the poor." Esther 9:22 (emphasis mine)

I wonder how "sending portions one to another" turned into giving our kids bags and bags of candy?

So here's my dilema: I treat the holiday the same way I do Halloween (which you can read about here).  I use Ellyn Satter's principles to help our kids build trust in themselves as competent eaters.  On Purim, just like Halloween, I trust them with their bags of candy.  They have permission to eat their candy and they know how to self-regulate when it comes to how much is enough in one sitting.  I try not to label the food as "good" or "bad" (which is very hard for me) and I give them space to make their own food choices.  But even though I trust my kids, I am questioning "Why is candy the default choice for sending food?   Why has the 'sending portions one to another' become food that is not worthy of really being called food at all?"

My kids are responsible eaters.  I trust them with a bag of candy and they do not abuse that trust. They don't binge and they don't eat it all in one sitting, but I worry about the other kids who are not being raised to be competent eaters.  I worry about how parents are going to take away their kids candy or throw it away, or make their kids feel bad for eating it.  I worry that, as a community, we are sending the wrong message about how we should eat.  I worry that I'm being too judgemental about this as well. I mean if I really feel like there are no "good foods" or "bad foods" than why do I care that my kids get piles of candy?  I care because I am a member of the community.  I care because I'm a parent.  I care because some of this stuff is not really food at all.  I care because I want us all to have a healthy relationship with food.

It's not a black or white issue.  There is no right or wrong here.  There is just gray area and room for discussion and maybe a better understanding of what are we feeding our children.  My hope is that we begin to look a little closer to the true meaning of the day instead of just another opportunity to give out candy that turns my kid's tongues blue.

Here's just some of this year's loot: 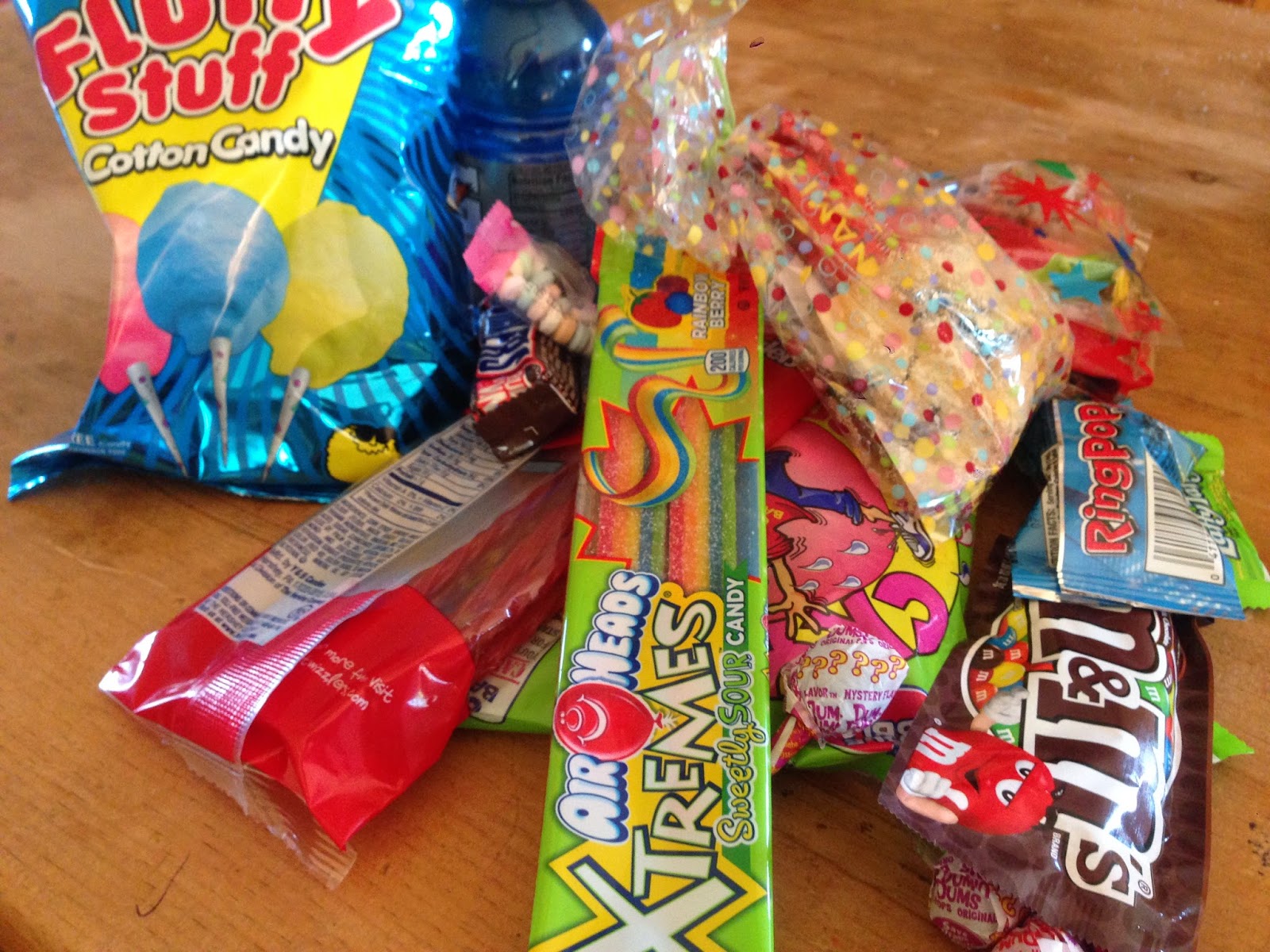 Instead of the emphasis on food and candy, why not find a different meaning to focus on.  Like the maybe the tweet below can give us a good place to start.

Today is Purim, what part of yourself would you share with others if you felt completely comfortable to do so?
— Ruth Abusch-Magder (@RabbiRuth) March 16, 2014