These Are Not the Clients You're Looking For

I'm getting closer and closer to starting my own private practice.  I've registered my practice name as a DBA (Doing Business As), I've got insurance coverage for my practicd and I'm zeroing in on an office space.  I will only start seeing clients on a part-time basis because I still need to keep my full-time job but things are moving quickly.

As I'm starting this new journey, some acquaintances have referred some friends or family that they'd like me to see.  One such referral was for someone who was looking to lose weight because they were interested in joining a branch of the U.S. Armed Forces.  In case you did not know, each branch of the service has their own weight requirements and everyone who enlists must be below the maximum allowable weight or they are not allowed in.

From what I could gather, my client's date to enroll was getting close and needed to jumpstart their weight loss plan and they were looking to me for guidance. I thought long and hard about whether I should take this client.  Just like I tell my clients to do when they embark on making changes, I weighed the pros and cons of taking the client.  After some time I made a decision not to take this client on.  In the end my decision came down to this:

I really struggled with this decision.  As I'm starting to make a name for myself in the private practice world, I was essentially throwing away money by rejecting this client.  Could I have helped them meet their goal?  You bet I could have.  I'm sure I could have helped them learn how to count calories and plan some meals that would help shed the pounds but at the end of the day, I don't think that's why I'm starting a private practice.  If I took this client, I was starting down a slippery slope and eventually I'd be seeing clients who came to me only for quick-fix weight loss plans.

So my question is this: Do you think I made the right decision?  Should I stick to my beliefs or should I not turn away any possible client as I get my practice started?  I'd love to hear your thoughts.  Also, be sure to stay tuned to hear more exciting news about my private practice.

Happy Is The New Healthy 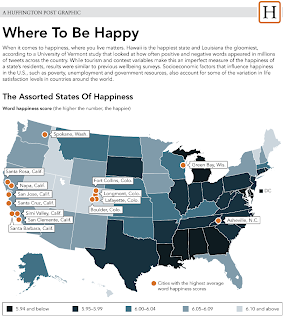 Recently I saw this interesting article on Huffington Post.  It was an infographic (displayed on the left) that showed which states were the happiest.  The study done by the University of Vermont analyzed Tweets from across the country looking for negative language.  Using that data and calculations they tried to see which states were the most negative and positive thereby assuming which regions were happier than others.   The states with the ligther colors were "happier" than those that were darker.

When I saw that map, the first thing I thought about was a similar map we've all seen so many times from the Center for Disease Control (CDC) which shows obesity rates across the country (see map below). 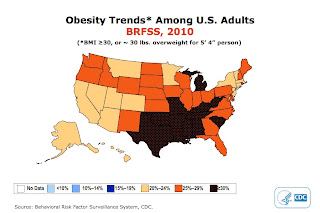 These maps make me think about the old chicken vs. the egg argument.  Which came first, the weight gain or the negative attitude?  Thinking about it, I thought of course the happiness is first then weight follows.  My wife saw this and thought of course the weight gain came first and then the decline in happiness follows.  We each saw it totally differently.

My theory is this: happiness leads to healthy behaviors.  I'm not discussing obesity rates, I'm talking about behaviors.  The states that are happiest--California, Colorado, Arizona Nevada, Minnesota, etc--also seem to have lower obesity rates.  Ok, so I don't love BMI as a tool to determine health but for the sake of this argument it is an interesting basic correlation.

It reminds me of another theory about health as it relates to behaviors and that is Blue Zones, These are communities around the world where people have longer life spans than the general populations.  The notion is by looking at these communities we can try to see the key to not just living longer but also living better.  The Blue Zone site recommends the Power 9®: the behaviors these Blue Zones have in common that lead to longevity.  If you take a look at them you'll notice that many are about belonging, connection with people, friendships and overall happiness.

My theory is simple.  Live happier, live longer.  I don't care what your weight is but if you are happier, you are going to have healthier behaviors that will help you have a better quality of life.

Think about it, when you are depressed, sad, lonely, bored or angry, how many of us go to food to help us feel better?  Perhaps if we worked on being happier instead of being thinner we'd eat a lot better. We'd move our bodies more.  We'd live longer and live better.

So what do you think?  Is your health determined by your happiness?
Posted by Unknown at 2:10 PM 1 comment: