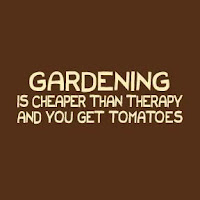 This summer is the third year that I've planted a vegetable garden in our back yard and each time I learn something new.  You might think, "Well of course he has a garden, he's a dietitian." I originally planted my garden for almost that exact reason but also because:
Now, I must confess that I am a very low maintenance gardner.  I water, I weed, and I harvest and probably not as often as I should.  I basically have a Ron Popeil attitude: I set it and forget it.  I would not say I have a green thumb, it's more yellowish and probably from over or under watering, I don't know which.

As the years go on, though, my garden has become more than I expected.  It all started a few days ago,  my daughter said something to me that really made me think.  She's 4 1/2 and when we were outside watering together she said, "Dad we have to share the food we grow, right?  That's what we are supposed to do with our garden."  She probably said this because she noticed that if we have something ripe to harvest, and we are going over to a friend's house, we bring whatever we pick as a gift.

After thinking about what my daughter said for a couple of days I realized that yes, part of the fun of having a garden is that I get to share my harvest with friends.

My garden is not just about what I do to the dirt and to the plants, it's about what the dirt and plants do to me.  If I spend 5 minutes outside in my garden, I notice I am more relaxed.  I am so proud when I see a small piece of fruit or vegetable start to form.  I feel accomplished.  I also get great joy from watching my kids look for worms, pick ready-to-eat vegetables, and help choose what to plant each year.  Although my yield each harvest is relatively small, nothing tastes as good as a vegetable that you grew in your own yard.

My garden helps connect me to my food which is another exercise in Intuitive Eating.  I want to savor each bite of cucumber, corn, tomato or pepper that comes from my own work.

To really understand what a garden can do for you, watch the YouTube video below from a recent Ted Talk.

So how is my garden doing this year?  Here are some pictures so you see how things are going.  And I will add more photos as things continue to grow.  As always, I welcome your comments and thoughts.


This time of year creates some angst in my life. It around this time of year that I get my renewal notice for my membership to the Academy of Nutrition and Dietetics (AND). For the past few years I have really struggled with whether or not I should renew my membership. I have written about my issues with AND here but to put it succinctly, I do not like the fact that AND partners with organizations like Coca-Cola, Hershey's, Mars Inc., General Mills and Kellogg's. I think that it sends the wrong message about our organization as a whole--whose primary goal is to promote good nutrition--while taking money from companies whose products are mostly thought of as not healthy.

This year I have decided I will no longer be a member of the Academy. What happened this year to change my mind? Two things.

First, I found out that the Academy's new President, Ethan Bergman will be carrying the Olympic torch in England this year. That seems innocent, right? Then I found out that Mr. Bergman received the honor of being a torch bearer because he was selected by Coca-Cola (a major Olympic sponsor). What message does it send when our professional organization President does something as public as carrying the Olympic torch because Coke sponsored him? To me, it paints a picture that the two organizations have a pretty close relationship.

The second thing that finally tipped me over the edge was the Academy's press release after Mayor Bloomberg's proposal to ban the sale of large sugary beverages (soda) in New York City. In case you don't know the original story you can read it here. The proposed ban has sparked a lot of debate on the role of government in regulating our diet and the impact if sugary beverages on obesity. The Academy of Nutrition and Dietetics released a statement on the ban. In brief they said,


"The Academy supports strategies designed to encourage people to make healthful food choices," said registered dietitian and Academy President Sylvia Escott-Stump. "To date, most bans and taxations like the New York proposal are based on theoretical models. There is conflicting research on whether these programs actually result in behavior change that leads to positive health outcomes." Escott-Stump added: "As a science-based organization, the Academy of Nutrition and Dietetics believes there must be an evaluation component to these programs. We need to measure behavior changes across the population as a result of the program. Then, we can determine if the changes are long-term and whether they contribute to a reduction of chronic diseases like obesity and diabetes."

This release is so "blah" and without opinion that I was blown away! Why not take a stand on the topic either way instead of such a wishy-washy, wait-and-see attitude?  At least join the debate! Did AND hold back because their major corporate sponsor is Coca-Cola? Is AND holding their tongue because they don't want to bite the hand that feeds them? It sure seems that way to me.

There are a number of dietitians that feel like I do and according to this article,  61% of dietitians who are members of the Hunger and Environmental Nutrition (HEN) dietetic practice group (DPG) opposed AND's corporate sponsorship.

After much thought and discussion with colleagues whose opinion I value, I decided to vote with my pocket book.  I am not renewing my membership because I do not support the Academy's position on corporate sponsorship.  AND has many things to offer RDs but I choose to not participate until they change their stance on this issue.

I know that some of you will disagree with this opinion and I welcome your comments.  It is discussion and debate that is needed on this topic.  I am taking a stand...will you?
Posted by Unknown at 6:59 AM 8 comments: